Get Lucky Half Marathon Race Recap

Since the Boston Marathon is four weeks away, this weekend was the perfect time to throw in a "tune-up" race. I had no plans on using this as a pace predictor for the full, since I am just getting back into the swing of things after my injury, and I hadn't run over 12 miles since November.

Signing Up:
The "Team Ortho Get Lucky Half Marathon" fit the "tune-up" race bill. So about two weeks ago, I signed up. One complaint about these big corporate races which I make often, is that the entry fee is advertised as $69.77 (get it? 7s are lucky!). Once you've entered all of your info and finally get to the checkout web page, a $5.50 "fee" is added. So, the final price, was an only half as lucky total of $75.32!

It's no mystery why races do this, they figure people will be attracted to a sub $70 race, but in reality the race is ~10% more. They tack a meaningless fee to the price and add almost 10% to their bottom line.  Anyway, I'll quit my complaining since I'm just glad someone was holding a half in Chicago in mid-March! Just beware, that most races cost a little more than advertised. 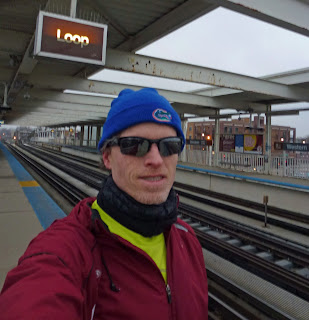 I switched to the Red Line and made it to the Roosevelt Rd. station at about 8:05. After a 15 minute walk from the train to the race, I spotted other runners much more festively decked out than I:

Eventually, I made it to the Chicago Running Blogger meetup at the gear check and got to meet Xaarlin (and her awesome owl head hat) for the first time! 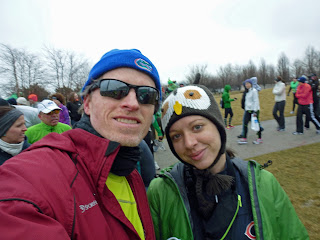 Apparently, we were the only two bloggers at the meetup, so we checked our gear at the tiny gear check. I think most people must have driven and used their trunks as their personal gear checks, as the line moved surprisingly quickly.

Since the race didn't start until 9:07 (get it?), we hung around in the cold for 20 minutes. Then we went on a 0.6 mile warm-up jog, just before the start of the race. The half marathon course ran essentially straight south 6.5 miles, followed by 6.5 miles north on the same trail. During our warm-up we quickly realized that the winds would be directly to our backs for the first half and directly in our faces for the 2nd Half. As the Tribune weather forecast put it:

So, in order to avoid too much discomfort, we would have to pace ourselves for the first half even though the temptation to run fast was present. We would have a mega tailwind for 6.5 miles!


The gun sounded and we were off. This would be my first race ever that I ran with someone I knew! Fun! Xaarlin and I chatted as a few runners sprinted ahead taking advantage of the tailwind. We were just a little more cautious, trying to hold back to preserve the much needed energy for the 2nd half. I heard more than one person mention that once we made the turn at half way, things were going to get bad. I also heard a couple of people compliment her owl hat! I've got to get one.
Xaarlin and I were joking that we were hoping for the winds to change direction for the second half so we would have dual tailwinds! Unfortunately the winds did not change direction for us.  We made the turn and it started to rain a little. During the first half of the race I mentioned/bragged to Xaarlin that I rarely go to the bathroom during half marathons, I just calm down a little and forget about it. Well, wouldn't you know I had to really go just after the turn! Luckily, the sole porta-potty at the turn was unoccupied, so I ducked in it and she continued running ahead and I told her I would try and catch up with her.


Once I left the porta potty, things got really rough, as my sunglasses got completely covered in ice and I could barely see through them. The winds were probably gusting at over 20 mph and it felt like that there was a giant man pushing against me as I tried to run. Eventually, I caught up with Xaarlin and we ran together again. Despite the howling headwinds and pelting sleet coming off the lake, we were running hard. It made my legs strain and my lungs burn. It's these kind of conditions that pay huge dividends in marathon training. It is a monumental effort to move forward, so we were building lots of strength and endurance without the leg pounding that such effort normally requires.

My ankle felt pretty good at mile 10, so I decided to "race" the rest of the way in. I told Xaarlin I would meet her at the finish line and we parted ways. I then started reeling in runners that had gone out too fast. In fact, from mile 6.2 to mile 13.1. I passed 38 runners and was only passed by 5. How do I know? Because of the very cool individual results sheet that was available to each runner shortly after the race! See mine:

Anyway, completely exhausted, I sprinted past the 1:45 pace group 20 yards from the finish line and stepped on the last timing mat. I was done!

Post Race:
After the finish, I collected my medal and headed to gear check to quickly grab my video camera to shoot Xaarlin's finish. Unfortunately, gear check could not find my bag! I actually had to go behind the gear check desk and into the sea of bags to find my bag. By the time I found my bag, 5 minutes had elapsed. I hurried over just south of the finish line, and set up my camera. Unfortunately, I was probably less than a minute late, as Xaarlin (unbeknownst to me at the time) had already finished.

So I got some video of random runners, which you can see here, here, here and here:


After looking for Xaarlin unsuccessfully for about 5 minutes, I was starting to get mild hypothermia as the cold wind was chilling my already cold sweaty running clothes. So, I made a "bee line for the Red Line" so to speak. I did stop on the way to take a quick picture the St. Patrick's Day parade staging area on Columbus Drive. There were a few DeLoreans getting ready to drive in the parade:


As I was slowly turning into a popsicle on the "L" (I was sitting by a door), all I could think about was getting warm. So, as soon as I got home I had a hot bath and then ate some hot chili. It's good to be warm again!

16 miler next weekend then my taper starts!
Posted by Pete B at 2:41 PM