After over 10 years of running, I finally gave back and volunteered at a running event! Since I was a participant in the 2013 Boston Marathon, it made volunteering at this race even more meaningful. All the proceeds of the race go to the victims of the bombing.

I got up at 5:45am, and after walking my dog and making a thermos of coffee, I was on the road leaving the city and headed towards Libertyville, IL (which is about 15 miles from the Wisconsin border). Luckily traffic was über light at that time so it took me a mere 35 minutes to get that far north. I arrived at about 6:50 and made my way over to the start area. I helped move some picnic tables and also set up the pop-up tents. Then Gingerfoxxx, Matt, Anne and I started filling up the 312 beer coolers:
Then we headed over to the parking area to direct cars into lot B. Here are some action shots of Matt and Gingerfoxxx and their patented parking moves:
Then we headed over to the start line where I got a picture and a video:
Video of the race start:

Matt, Gingerfoxx and I then were assigned to the course to direct runners around the final turns of the course. As Matt encouraged a flock of geese to get off of the trail, I stationed myself a little higher up, at the top of the last hill. I yelled encouragement to runners like "you just conquered Heartbreak Hill!", but 90% of runners had their headphones on, so my attempt at humor was heard mostly by the trees. Two running bloggers Chris and Eric stopped by to say "hi" after they finished.

Video of the finishers at about mile 3:

Then we made our way over to the finish area to enjoy a 312 with the rest of the group: 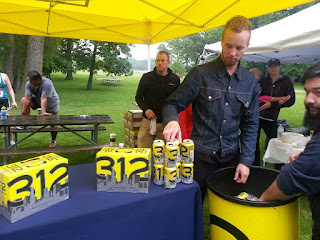 And finally a group blogger photo:
It was great seeing and meeting lots of new running bloggers. A good time was definitely had by all and I'm definitely looking forward to volunteering at a race again soon!
Posted by Pete B at 12:26 PM