Is it too early to award a race "Favorite Race of the Year?". Well, I may have found a winner already! I had such a great time at the Allstate 13.1 Marathon, it may be hard to top.

Free VIP Entry:
A few months ago, I was lucky enough to win an entry to the 13.1 Marathon from Nina at Run Dance Love. She e-mailed me last week that we would also be getting the VIP treatment as well. That is, she was able to score passes to the VIP tent from the event sponsor! Being a race VIP would be a first for me! I had run the 13.1 Marathon in 2009 and my memory from that race was running on hot sidewalks/trail. Even before this year's race, I knew this time would be a lot better.

To Race or Not to Race:
Last night before I went to bed, I was about 50/50 on whether I would run the race. I have been having some tarsal tunnel type electrical pulses on the inside of my right leg for the past few days. I am sure I got them from my over-training/racing last weekend. I probably needed a few more days of no running for them to subside. So, I set alarm for 4:45am and decided that when it went off I would make a last minute decision.  I went to sleep and when my alarm went off, I got up, checked my leg and checked the weather (48 degrees!), and decided it was worth risking further injury to run. I figured why not, since, I don't have any more long races in the next several weeks, I will have plenty of time to get better. I promised myself I could have an entire week to heal and rest my leg after the race.

Pre Race:
I was hungry when I woke up so I ate almost an entire bagel with peanut butter and cream cheese. I also scarfed down a banana. That might have been a little too much pre-race food. I walked my dog, then jumped in the car and headed down to the Museum of Science and Industry to catch a shuttle to the starting line. This was a heaven sent trip to the race! There was almost no traffic on LSD, I found a free street spot only two blocks from shuttle bus pickup area, and got right on a bus and 10 minutes later, was at the South Shore Cultural Center.
I met Nina (who was running the 5k), by the general bag check at 6:30am. This is where there was supposedly a Running Blogger pre-race meetup. However, after waiting a couple of minutes, we did not see other bloggers amongst the masses.
After waiting to no avail, we headed over to the VIP area. We checked in at the VIP tent and got our all-access bracelets. I used the VIP porta potties and we checked our bags. About 5 minutes before the race start, we ran to the "A" Corral. With two minutes to spare, I had just enough time to tighten my shoelaces. The horn sounded for the "A" corral and I was off.

Race Strategy:
McMillan's Running Calculator said I could potentially run a 7:01/mile half marathon pace (1:32 half) based on my 41:11 10k last weekend. However, that 1:32 is assuming one has logged the appropriate miles to race a half, and I haven't. So, I was targeting somewhere around a 1:33 or a 7:10/mile pace.

The Race:
Miles 1 to 6:
The race actually closed the road off in front of the South Shore Cultural center which is a nice touch as we weren't forced onto the sidewalk. Then we ran a nice shady stretch through Jackson Park and finally it was out to the Lakefront Trail. I usually don't like races that use the trail, but this stretch is so remote compared to the path on Chicago's North Side. It was awesomely spectacular! The cool breeze off the lake, the azure blue sky, and the skyline were all phenomenal!  You really could not ask for a better experience. At about mile 5, I saw the two Kenyans heading back who were leading the race dueling it out for the $1,000 first place prize. Near mile six, I saw Xaarlin and her boyfriend and she snapped this pic of me:

Miles 6 to 13:
Since it is an out and back course on the Lakefront Trail, this was essentially the same path for the return trip. I spotted Britt from Chicago Runner Girl coming towards me about a minute or so ahead, and I waved to Xaarlin once again and she got these professional looking shots of me and the skyline.

A group of French students was handing out water near the mile 8 aid station and I gave them an enthusiastic "Merci" as I got my water. As I mentioned, it is essentially an out and back course on the same path, but with one major exception. At mile 10 there is a "giant hill" (by Chicago standards). The hill was also the spot where I started to feel like I was fading. I could not put my finger on why I was fading: It may have been the fact that I ate too much before the race that my stomach was still full. I thought my lungs should have easily been able to handle 13.1 miles. However, I have to admit that the main reason I was fading may be that the residual endurance effects of Boston Marathon training are starting to leave. It has been seven weeks since the race. Anyway, I made the decision to walk up the "giant" hill. Surprisingly, I did not get passed by too many runners as I walked. The fade did cost me a negative split, however, but not too bad.
Average Pace for miles 6 to 13: 7:19/mile.

Mile 13.1
We ran around the South Shore Cultural Center for what seemed like a mile, but finally, near the beach, I spotted the finish line. I turned on a mini-sprint, but was unfortunately unable to pass anyone. On the bright side, I did not get passed. Nina, and the announcer both called out my name as I finished! Pace: 6:23/mile. 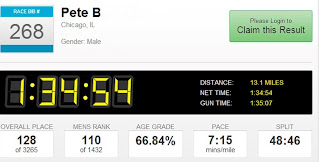 Post Race:
Nina was able to find me right away. She was fresh off of a 5k pr (or near pr). Congrats Nina! We hung out at the VIP tent for a little bit, where we got some awesome free VIP sandals! Nice perk!

Then we made our way over to the general post-race party. Nina scored a balloon heart flower from an elderly balloon clown!
In the Michelob Ultra beer garden we spotted running blogger Amanda from TooTallFritz. We hung out for about a 20 minutes in the beer garden chatting away.

We also got to meet Nicole, who seems to be friends with every running blogger! :-)
Finally, Nina and I left and took the shuttle bus back to the Museum of Science and Industry.

What an awesome fun-filled morning. Thanks to Nina for the race entry! Luckily, I made the right call this morning to run this race. Now it's time to rest!
Posted by Pete B at 2:13 PM