This was by far the coolest temps I have ever raced in at the Chicago Half Marathon, so it all set up for a faster than normal race for me. Perhaps a Chicago Half P.R. was in the works....

GOAL: At this point in my marathon training, I am supposed to do a 10 mile tempo run at marathon pace, so I planned on using the Chicago Half Marathon as a "race simulator" and try instead to run 13.1 miles at as close to marathon pace as possible. 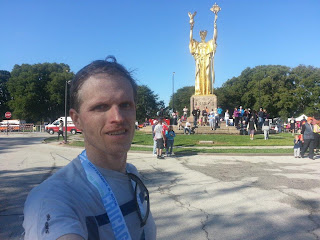 Getting To the Race: Car pooled with five other neighbors who all live on the same block as me. We left our block at 5:45am. Got parked about a mile from the starting line at around 6:30am.

Getting to the Starting Line:  I hustled from the car to the starting area in Jackson Park and immediately got in line for the porta potties.  The line moved really slowly.  In fact by the time I was out in the fresh air it was about 6:58am, two minutes before the race! Unfortunately, the corrals with the thousands of runners created a solid wall that separated me from bag check! So I had to run about 0.25 miles to go around the back of the corrals, at which point the race started, and I still needed to check my bag. I ran another 200 yards to bag check. I checked my bag and then ran to an open corral and got across the starting line 6 minutes and 3 seconds after the gun sounded. 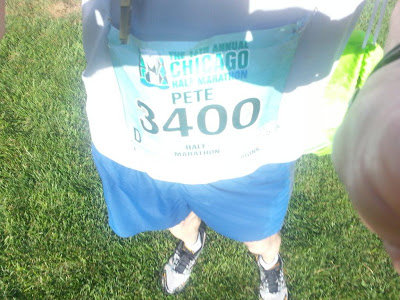 Miles 1 thru 5 "The Great Weave": My goal for the first few miles was a 7:00/mile pace, but now I was back with the 10 minute milers and even some 15 minute milers! I literally had to run on the sidewalk and grass along the road for the first mile, dodging spectators, just so I could pass the walkers and slow joggers on the surface roads. During miles 2 and 3 I ran outside the pylons and had to weave back in and out as the course marshals would shoo me back onto the course. In addition to the extra distance spent weaving, I got a lot of practice "surging" in these first few miles, as my pace sped up occasionally when I had to squeeze between other runners as I saw breaks in the crowd. I expended more energy than I would have liked, especially in these early miles. I passed the 1:55 pace group and then the 1:50 pace group. My pace for miles 1 through 5: 7:03/mile.

Miles 5 through 8: "Into the Wind": At last we were on LSD (Lake Shore Drive) with beautiful views of the lake. Since LSD is pretty wide, the crowds were not as big of an issue as on the surface roads.  However, we were running into a head wind. Which, since the temps were cool, felt pretty darn good. Plenty of aid stations and some music. I passed the 1:45 pace group. Pace for miles 5 through 8: 7:00/mile.

Miles 9 through 13: "Where did the Wind Go?": There probably was a slight tailwind on the home stretch back to Jackson Park, but I did not notice it most of the time. By the way, Lake Shore Drive is a lot hillier than it seems when driving on it. I passed the 1:40 pace group, then made the turn towards the giant gold "Republic" statue. Pace for miles 9 through 13: 6:53/mile. 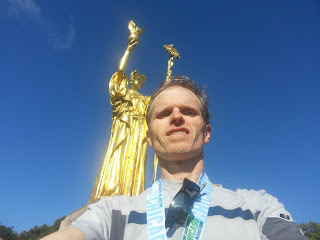 Mile 13 through 13.1 "Violence Near the Finish Line": After hitting the 13 mile marker, I threw it into a higher gear and started my typical "kick" just before the finish line. Most of the runners I passed were likely going to finish around 1:37, so their kicks might have been slightly slower than mine. At about 100 yards out from the finish line, I got ready to pass another runner. I think he spotted me out of the corner of his eye and obviously, did not like the idea of me passing him. So, once I got alongside him, he threw his shoulder into me, nearly knocking me off balance. However, I was able to quickly recover, and  in a dead sprint, lunged at the finish line and kept running 20 yards past it. I probably could have turned around and tried to figure out which guy had thrown the shoulder. But there was a mass of people, and I was completely spent, and was in no condition for an argument/fight. Why do people get so mad when they get passed that they need to resort to almost knocking someone down? Is this a hold-over technique from finishing in those narrow high school cross country chutes? Pace 6:00/mile.


Post Race: After video taping the 1:45 to 2:00 hour finishers, I met up with my neighbors by bag check. We got some good Lou Malnati's deep dish pizza and some watery beer. But hey, it was free.

Then I got my neighbor group to go over and meet up with Gingerfoxxx, Matt and Waffles! at the HD tent, where we were generously supplied with some drinks called "Red Ribbons" (Bloody Marys and PBR), which actually tasted quite good, especially after the first few sips. Thanks for the hospitality guys! 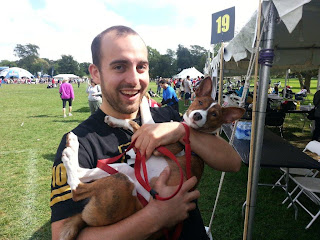 Conclusion:
Pluses: Great race temps, good food, okay beer and it was fun finally meeting Waffles! Also, I met my objective to run at my marathon tempo. Minuses: I need to get to the race way earlier next time, so I won't have to run extra to get to the bag check and the starting line and then weave around slower runners.